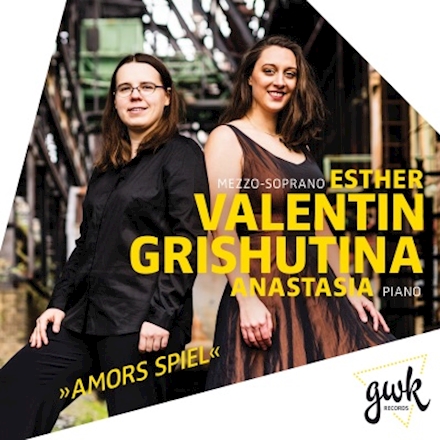 The CD of Esther Valentin and Anastasia Grishutina, First Prizewinners of the III. LiedDuo-Competition 2018, has been released by the label GWK Records. The CD was co-produced with SWR Baden-Baden.

Cupid takes aim and his arrow strikes home, transfixing his victim’s heart. What follow may be love. The songs that Esther Valentin and Anastasia Grishutina have chosen for “Cupid’s Games” reveal the whole vast spectrum of emotions that Cupid can trigger in mortals, emotions that range from the frenzy of happinness and jealousy to doleful melancholy and yearning. At the same time both artists cover a wide stylistic range from Haydn’s Classical art songs and Schubert’s Romantic setting to Schoenberg’s Late Romantiv songs and Moritz Eggert’s neue dichter lieben. An original selection for laughter, rapture and lamentation of love, with a light heart and humor, with drama, always with depth and yet refreshingly young interpreted: Esther Valentin and Anastasia Grishutina go with “their” songs of sweet torment of yearning, the poison of Jealousy, the tangible desire and sinking into a kiss as in the transcendence to the bottom, the insatiable turmoil and the blissful silence of love.

The CD “Cupid’s Games” is a part of the Schubert-Competitions First Prize and was co-produced by GWK Records and SWR2.

Listen to the CD on Spotify: